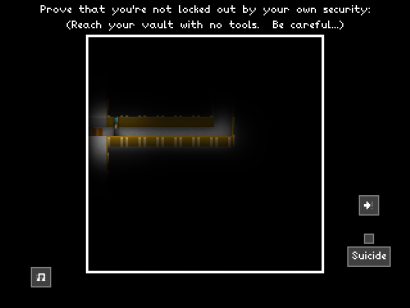 The self-test of a house's defense system is arguably one of the most dangerous parts of the game, next to entering another's house, and must be handled diligently lest you miscalculate a single step and lose everything you have acquired!

The self-test occurs when you attempt to leave your house and there have been changes to your home since the last time you completed a self-test. In it, you will start at the doormat with no tools and must reach your vault. Fog of war is on, traps are active, and your family will attempt to escape if they spot you.

The only way to cancel a self-test is to exit back through the front door. If the player is cut off from both the vault and the doormat, there will be no option but to commit suicide. All death in the self-test is permanent like in any other part of the game.

After completing the self test you are free to view the house list and others are able to see your house. All changes to your home are now saved. You do not need to redo the self test until your house has changed again.

It is a necessary part which all players must go through, and ensures the fairness of the house is maintained; all houses must be built such that the vault may be reached without the use of any items.

If you close the game in build mode before completing a self test, any changes you have made will not be saved.

Miscalculations that more commonly lead to player deaths in this phase of the game are:

Houses and traps are easiest to test when the house has a low cost, and plenty of open space, allowing the player to remove sections of wall which would otherwise entrap them. By this means you can test trap concepts safely, with a guaranteed means of leaving the house when fulfilled.

There are non lethal alternatives available for many tiles which still function in a similar way:

As a house becomes more thoroughly constructed and the traps more intricate and interdependent, this means of safely testing a house becomes marginalized, until eventually the only option left is to do a straight run-through of a completely constructed house. You must become accountable for your own safety in this event, and take the time to double-check the elements of your security system, or run the risk of carelessly losing all of the money, time, effort, and creative ideas which went into your security system's construction. Be careful!