From The Castle Doctrine Wiki
Jump to: navigation, search
Pitbull

The pit bull is a vicious dog that will try to attack and kill a robber[1]. Pit bulls also trigger Pressure Plates when they walk over them.

The pit bull will always move towards the player if there was once line of sight between the dog and current player, otherwise they remain stationary. The sequence of actions that relate to dog movement appears to be:

This means that a dog that is trapped behind a Powered Door will not start moving on the same turn that the door is opened.

Two pets may never share a tile, even if one of them is dead. If two dogs attempt to enter the same tile, the order of precedence is up > right > left > down, i.e. a dog that is trying to move up will enter the tile instead of any other dog; a dog that is trying to move down into the tile from the tile above will give way to any other dog; dogs moving left give way to those moving to the right.

In this example the player can safely move left, despite it seeming to be a dangerous move. This is because the chihuahua at the player's feet moves left before the pitbull can move down, thus blocking the pitbull from moving (down) and killing the player. 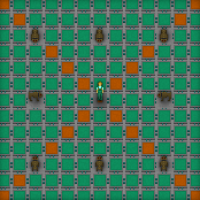